And let me state categorically that I will now refuse to be side-tracked until this dress is finished *spits on palm of right hand and offers to shake hands with whoever dares to come near* !

Because I will not be allowed to publish a picture of The Dress in all its glory until September 30, I will document the progress with artfully obscure pictures to accompany the inevitable lamentations and celebrations.

Meanwhile I discovered Marijana at Sew-to-Pro‘s “Six Napoleon Dress” Challenge for which the deadline is the first week in August.  I am holding myself back with all my might, though entering a challenge might have resulted in The Daughter having a stunning, unusual dress chop-chop! But I will abstain.

However, a lot of what she and the other girls in the challenge are doing to work out the Six Napoleon pattern and construct that dress is helping me with this one. So I am a Six-Nap-Voyeur.

The first idea I copied was Marijanna’s use of block-out lining for the muslin.  Genius!

Let me point out that this is Muslin no 5, right? The first two were poly-cotton. Dumbest idea ever because it shrinks and stretches and generally just loses shape. Muslin no 3 was the taffeta test bodice sewn with lace overlay and all.

Unsuccessful.  (Saved as a sweetheart bodice that will be completed sometime in the future.)

Then “wearable” muslin  no 4 warped because I just eyeballed the grain-line on the taffeta.  But at least then I did not feel bad about chopping it up to make this pattern: 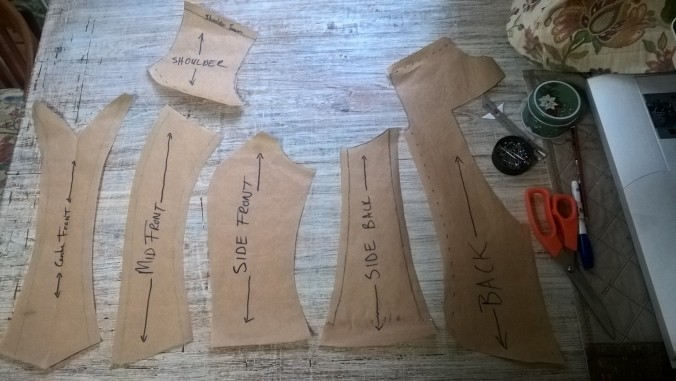 Which is coming together in block-out curtain lining:

One thought on “Not the Six Napoleon Dress”