Red of Sew Red-y is helping a lot of us to ‘get closure’ on our less successful projects this month, with her Fail February initiative.

I got stuck on the third item for my Sudoku grid, and with stuck I mean properly stranded, taking three weeks to produce an unlined unfitted cape-like jacket with unfinished seams.

Thing is: I made it infinitely more difficult than necessary. I had a charcoal knit in my stash, and decided to make Vogue 9140 from it, but line it to make it reversible.

My previous reversible effort was this:

Two years ago, for my first PR Wardrobe challenge, I made the above uncomfortable   U.U.U.G.G.L.Y!  thing.  Apart from obvious fitting issues, the warped check design created the optical illusion that I was pregnant.

It did not look too bad when I styled it for the composite picture below, but in reality I never wore it even once before giving it away to someone who I don’t think ever wore it either…

But while I looked up the horrible reversible jacket, I realized that most of that wardrobe was actually a  FAIL.  Oh my.  I cringe when I look at some of it.

The brown cowl top, the 90’s  floral dress and drawstring-sleeved tunic were the only things that I liked wearing.  But the wide-legged pants?  Yuk!  The denim flared skirt? Made it too tight so its been worn only twice.  The long red tunic? That style is sooooo dated now! And after this post we shall never mention the 2-in-none jacket again.

So I should have known better than to even TRY making V9140 reversible.  But just to make it worse, I decided the beige check I was planning to use for lining was TOO contrasting, and I went shopping for a lightweight charcoal knit.  I came home with a tracksuit knit even  heavier than my jersey knit. Marked down because of a flaw. Sucker, I am.

The Daughter and I trying to do the elegant supermodel-thing 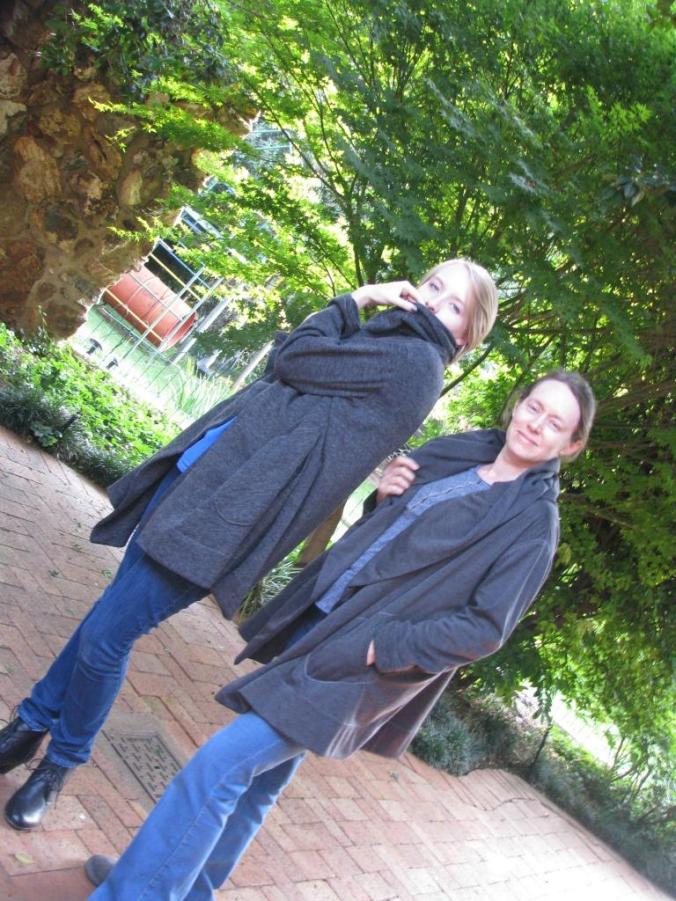 Eventually I had to admit (after I had laboriously completed both layers): my over-engineered reversible jacket would too heavy.  Thus the reversible plan went out the window and my daughter scored the jersey  incarnation while I kept the tracksuit-knit one.

When I sew with fabric I do not really like, I tend to procrastinate a lot.  Working in this DEAD grey just did not make me excited about getting back to the sewing machine after any distraction (of which there are many, lately.)   To be honest, if I did not feel compelled to do a Fail February blogpost about it before the month was over, it would STILL not be finished.  Yeah for blog challenges!

When the Daughter first tried on her version, she pulled the hood over her head and went: “I am a Dementor! I am going to suck all the joy and hope out of you!”  Yep. That.

As if I had nothing else to do, I decided to make this work from a Marcy pattern I have sewn before:  My Dementor Coat!

Doing the Ugly Dementor thing is a lot easier than doing the Elegant Supermodel thing.

This is not ENTIRELY a “fail”.  It will wearable, like a bathrobe I can wrap around me to lounge around the house listlessly.  Any Dementor spotting me in it, will lose interest and decide his work here has already been done. So. It is actually some kind of secret weapon.

I have now ruined my own well-planned sewing aspirations and left myself with only one month to sew all the remaining nine items I need to populate the grid.

A dress for every day of the month and a special occasion, winter and summer

The Pretty and The Kitsch

Vintage films, books, sewing, womanhood and everything in between

Reducing stress one exhale at a time ...exploring Southern California and beyond

SHARING MY LOVE OF SEWING & OTHER HANDMADE GOODNESS